Unsportsmanlike Conduct: Taking the Slurs Out of Hockey 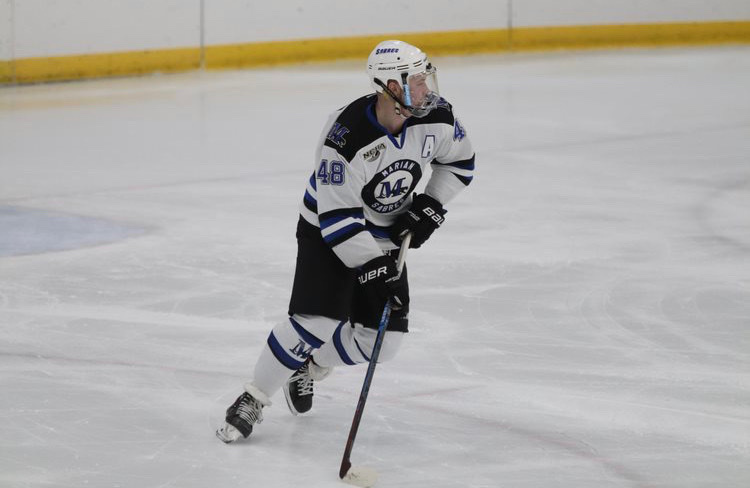 REGINA, Sask. - I heard taunts from the opposition. There were the insults from fans in the stands. Sometimes it was my own coaches and teammates using homophobic slurs as generalized putdowns, thinking they were being funny or motivational. At the time, I think most people just chalked it up to acceptable forms of trash talking and chirping.

Looking back, I now realize the long-term effect that can have on people. The language that is allowed to be used openly and freely in just about every situation can be really damaging to a person’s psyche. I am hoping by writing and talking about my experiences it will help change attitudes and actions in others.

There is a saying in sports when it comes to the locker rooms, ‘You leave your baggage at the door.’ What that means is leave all the distractions and all your day-to-day worries behind. Things like school, your job and your relationship are all forgotten when you get to the rink for a practice or game. You are a team, your identity is shared. You’re all focused on the same thing and that is winning.

At the time, I didn’t fully understand myself, who I was or who I could be. I didn’t really know anyone who was gay and there was such a stigma about sexuality. I figured because I was a hockey player, I had to be macho and I had to be straight.

After hearing the comments, the put downs and the slurs for so long, I had this ingrained image in my head that I couldn’t be both a good hockey player and be gay. I couldn’t be what they so openly hated because it also meant that I would be weak and terrible at hockey. So, I left my baggage at the door and picked up that macho image, and the so-called toxic masculinity that goes along with it. I put on a different persona.

I started to realize I was putting down one set of baggage at the door to the locker room and was picking up another because I felt I had to hide something about myself from my teammates and coaches. I couldn’t be truly in the moment because after hearing all the negativity and slurs about gay people, I was afraid of how they’d react.

After Junior A, I moved on to play at the college level. I was still playing hockey, but more and more I started to realize who I was and began to come to terms with my sexuality.

I still heard the jabs, the taunts and the slurs. Then came the rumours. First the whispers and innuendos around the campus. Soon my teammates were questioning each other. It was getting harder and harder to leave my true self at the locker room door.

The tipping point for me was when they started to prod at my roommate instead of having a backbone and asking me directly. They were making these comments to my roommate to see if he would spill the beans.

I wanted the awkward questions and inappropriate comments to stop. I was sick of the slurs, the disrespect and, especially, sick of the fact I could not be myself with the very people I was supposed to trust. I knew I had to open up to my teammates about my sexuality and how much their comments hurt me personally.

I remember asking myself, ‘If they reacted badly, was I ready to be done with hockey?’ But what I really needed to know was, if hockey was ready to keep me as a gay man.

I first talked with my parents, coaches and some of the teammates that I was closest to. Then I came up with a plan.

I called a meeting in the very locker room where I was supposed to leave my stuff at the door. I wrote a letter and made a speech to my teammates. I opened up and came out to them. I told them how much their language hurt. I asked them for acceptance and to be aware of how much pain and doubt their offhand comments created.

When I finished my talk, I had planned to leave the room and let the team decide how they would handle the revelation. I was expecting certain reactions from some people. Instead, they reacted better than I could have ever wished for. People I thought would disown me or become even more cruel were among the first to voice their acceptance.

I didn’t need to leave that locker room.

As soon as I was done, a couple of guys stood up and said, “Brock, we support you. We love you. You’re one of our brothers. This doesn’t change a thing.” That was amazing. Then we literally had a giant team hug in the room. It was very emotional for me and it definitely was well-received.

I didn’t get shamed out of the locker room and I realized if my team was okay with who I am, hockey can still be a part of my identity and the two selves can live in unison. I realized hockey was going to keep me.

I found out I have a lot of friends and family that have accepted and supported me through the whole process. I found out a lot of people just didn’t understand the harm their misplaced language causes. They don’t care that I am gay — they are just happy knowing that I’m happy.

I received calls and emails from other students, athletes, fans, school alumni and from previous teammates and opponents who all offered words of support and, in some cases, apologies for using the same slurs.

I realized that because of the support I received I need to continue to be a catalyst for change. I need to help people understand how their words may seem like innocent, offhanded comments to them, but they can have lasting and devastating effects for LGBTQ2SI+ people.

We all need to do a bit of self-reflection and understand who we are and how we should relate to one another. I know this isn’t just a hockey problem. Homophobia is a problem prevalent in society and then it flows into the sport and creates this toxicity. It is ironic because the sport of hockey at its purest level is the furthest thing from a toxic environment. It only becomes that way when outside preconceptions and ideas are brought into the game.

It’s easy to put a pretty mask on an ugly reality, but we must remove it and stand up to homophobia. A big chunk of that is eliminating the negative language we use and hear. The intent of using derogatory words might seem innocent in the heat-of-the-moment, but people are a product of their environment. Those words have just as powerful of an impact to hurt someone as a high stick to the head.

Think before you speak, especially when you’re around young children.

Lead by example, be there to support people and help them up when they are down.

Instead of attacking what you perceive as a weakness, look to understand the situation and the person. They may need and appreciate your support. Your words and actions can leave lasting impressions.

If you are straight, there is a lot of importance in being a support for people. Being accepting of all individuals can really open the eyes of others and help to change their attitudes.

Since I came out, I have had teammates call out people who used gay slurs at bars, saying things like, “It’s 2022, man, you can’t say that.” Seeing that kind of support means a lot to me and to others. It is simple and it works.

I also know I need to help others who may be facing the same uncertainty of what coming out will do to them and how their parents, friends and teammates will react. The whole experience was one I don’t think I could have imagined growing up. Now, I try to be there for people. If you need help or someone to talk to, I’m more than happy to help. It’s humbling to know that people find comfort and confidence in knowing that someone like myself has gone through it and come out relatively unscathed.

My dream of competitive hockey has come to an end. I still enjoy playing the game, I still love putting on my pads, lacing up my skates, grabbing a stick and heading out onto the ice with my friends and teammates. What isn’t to love about the game? After all, hockey has given me just about everything.

I understand the journey of being an athlete in situations where people may not accept you, but I hope my path can empower anyone who is struggling. I want to reassure anyone reading this that there are people out there who will love you for you.