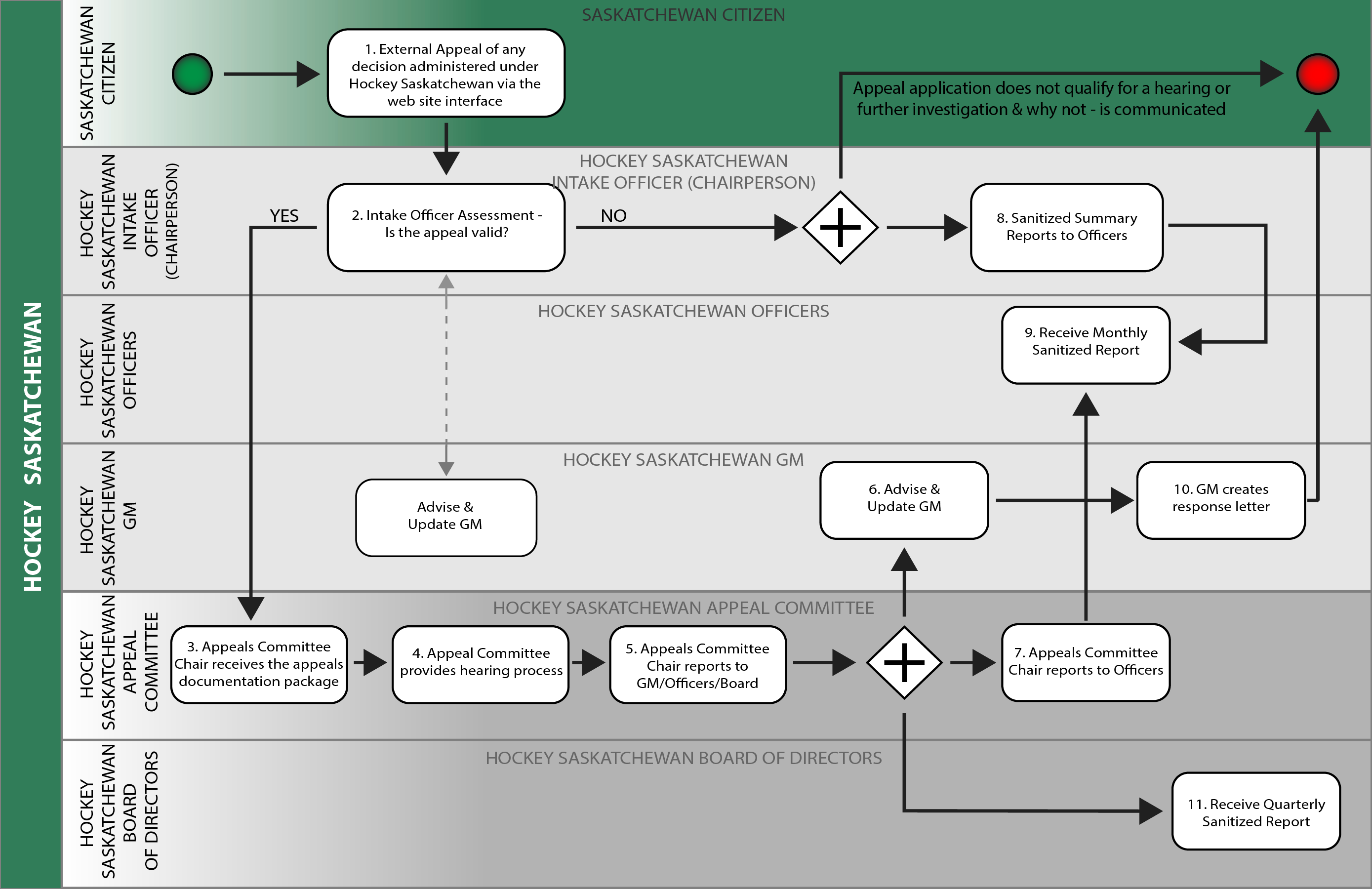 i.) The Chairperson of the Appeals Committee shall be a current member of the Board of Directors of Hockey Saskatchewan.

ii.) The Chairperson or their designate and any two (2) others appointed from the current board of Directors or who had previously served on the Board of Directors shall act as the Appeal Committee.

iii.) A member of the Officiating Development Program may serve as a resource in the Appeal of any suspensions that arise from a referee’s decision.

b) What decisions may be appealed to Hockey Sask?

i.) The decision that conflicts with the Articles, Bylaws, Rules, Regulations and/or Policies of a Member Association/League, Hockey Sask or Hockey Canada that may have had a material impact on the decision rendered.

ii.) The party making the decision committed a material procedural error or failed to provide the aggrieved party with a fair process that may have had a material impact on the decision rendered.

iii.) The party making the decision did not have the authority or jurisdiction to make the decision.

iv.) All appeal processes, if any, have first been exhausted prior to appealing to Hockey Sask.

c) What decisions may not be appealed to Hockey Sask?

i.) The following decisions may not be appealed unless the decision itself is contrary to Hockey Canada or Hockey Sask Constitution, Bylaws or Regulations:

d)   Process to make an appeal application to Hockey Saskatchewan

i.) An appeal application form must be received by the Hockey Saskatchewan Office via personal delivery, fax or email no later than thirty (30) days from the date the decision being appealed was sent to the person appealing.

ii.) The Application fee of $300 (cash or credit card) and must be received with the application form. ($50 non-refundable)

e) Process to make an appeal application to Hockey Saskatchewan

i.) Submitting an Appeal Application does not mean that you will receive an automatic Hearing. The Hockey Saskatchewan Chairperson of the Board will personally review the material submitted by the Appellant and determine if the application satisfies Hockey Saskatchewan regulation 3.07.03 a) and shall render a decision to proceed to a hearing or to decline Appeal application.

ii.) If the Hockey Sask Chairperson determines that a hearing will proceed, it will be heard no later than 14 days from Hockey Saskatchewan receiving the decision.

i.) The Application fee (less $50.00 administration fee) will be refunded to the Applicant when the application does not qualify for a hearing.

ii.) In addition to the refund, applicants will also receive a written decision and rationale from the Hockey Saskatchewan Chairperson.

You will be advised of the date, time, and location of your Hearing in writing via email.

Not all hearing include in-person attendance, if an individual is requested by the committee Chair to attend an in-person interview, there is no requirement or recommendation for representation, but you are welcome to have an agent, paralegal or legal counsel present with you at the Appeal Hearing or you may act on your own behalf at the Appeal Hearing.

i) Time Frame of Decision

As per Hockey Sask Regulations, a decision will be forwarded in writing via email to the Applicant within seven (7) days of the completion of the Appeal Hearing.